Use Battery Charger or any of the special summoning card's above to Special Summon Batteryman AA then activate Inferno Reckless Summon to bring out all 3 of the Batteryman AAs to the field from the Hand, Deck, or Graveyard. Due to Batteryman AA's effect, the ATK or DEF will raise by 1000 for every other Batteryman AA on your side of the field in the same battle position. If all 3 Batteryman AAs are in ATK position, then each one of them will have the ATK power of 3000.

Due to the effect of Inferno Reckless Summon, your opponent also special summons a face-up monster to their side of the field from their hand, deck or graveyard as well. Therefore, it may be necessary to have a mass removal card in your hand like Short Circuit and Lightning Vortex. If you play by Traditional Format it would be advisable if you used cards like Raigeki.

After activation, your 3 Batteryman AAs can then attack directly for 9000 Life Points. To add some extra damage, many decks run Guardian of Order in the deck. It can be Special Summoned if there are at least 2 Light monsters on your side of the field. You can also create OTK by removing two Batteryman AA to special summon Batteryman Industrial Strength, then activate his effect by removing another Batteryman AA, and then activate Return from the Different Dimension followed by a Short Circuit to clear their field for the game. 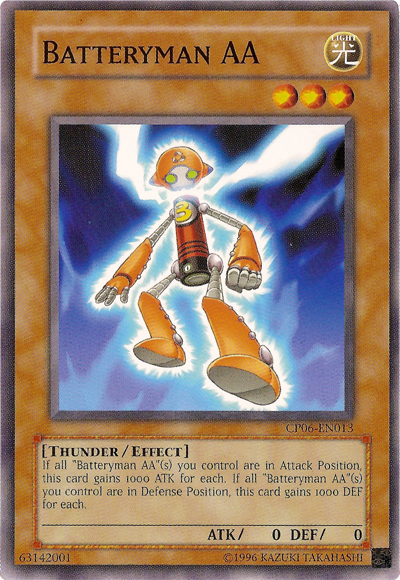 Retrieved from "https://myyugiohdeck.fandom.com/wiki/Batteryman_OTK?oldid=15880"
Community content is available under CC-BY-SA unless otherwise noted.