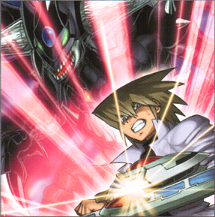 Dark Dragon Force is the twin of the Light Dragon Force deck, this one focusing upon the power of the DARK attribute. This deck focuses upon Dark End Dragon as it's ace monster; the deck uses lock down tactics to maintain control of the duel, focusing on keeping the opponent from bring out monsters to attack or defend with. Meanwhile the deck also uses banishing to shuffle monsters on and off the field to protect them, as well as refresh Dark End Dragon so that it can continue to punish the opponent.

This deck is also a prototype. If there are any suggestions on how to improve its lockdown strategy, then I will gladly take them.

Diabolos, King Of The Abyss X1

Call Of The Haunted X2

Due to the nature of both the Light and Dark Dragon Force decks they have a reliance on trap cards for their strategies to work, so if they are pitted against a Jinzo deck then they will have a severe disadvantage, especially with jinzo lord. If pitted against koa'ki meiru either they will also face an equal disadvantage, especially if the deck is built to counter spells and traps and keep them from being activated. Another weakness is if a Meklord lockdown deck is used against them, they quickly be overwhelmed and defeated if faced against them. Another weakness of both decks would be burn decks, as they have no real counter or defense against it, so things like the volcanic series have a chance of defeating either deck. Banishing decks, ironically, also kill this deck rather effectively.

Dark Dragon Force can also be slaughtered by cards that dispose of dark monster effects. also, decks that are designed to take out spell and trap cards to keep this deck locked down.

Retrieved from "https://myyugiohdeck.fandom.com/wiki/Dark_Dragon_Force?oldid=12415"
Community content is available under CC-BY-SA unless otherwise noted.